Since my expected due date is around the corner (just one week away…whoa!) I obviously won’t be documenting my full nine month journey…which is really closer to 10 months – 40 weeks – who knew?! I did want to give a few recaps of what I have experienced along the way because reading other blogs has really helped me through this journey to know what to expect, hopefully this will bring some clarity to those who are making their way through their own pregnancy or will embark on this journey soon.

The first trimester was pretty short for me, I found out I was pregnant when I was already five weeks along. I actually took a test when I was two weeks, but it came back negative so I continued living my life as a non-pregnant person…oops!  In hindsight, and looking back the test actually was positive BUT that second pink line was extremely light…anyone else would have read that as negative too, seriously!

The day after my Dr. confirmed the pregnancy RG and I headed up to the North Georgia Mountains with two other couples for a weekend of hiking, winery tours, grilling and drinking. This was the hardest time of my entire first trimester keeping it a secret. We were still taking it all in, getting used to the idea that we were going to have a child and it was still early enough that there were a lot of risks. As much as we wanted to tell our friends we decided it was best to keep it to ourselves that weekend. So this turned into three days of me pretending to drink (making non-alcoholic mojitos when no one was watching) and RG drinking for two when wine or beer was being consumed. Poor RG, no one could figure out how he was feeling so good before everyone else got there!

Most of the group on a hike in N. GA 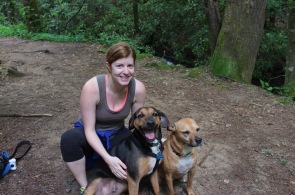 Me, Marley, and Marley’s BFF Winston

The crew in N. GA

Overall the rest of the first trimester wasn’t that bad – I was extremely tired, it was difficult to stay awake past eight o’clock and I became a master at pretending to drink but I was fortunate to not have to deal with morning sickness regularly.  Here is a small recap:

Overall weight gain – I gained one pound during the first trimester, I had initially gained more but then lost a few pounds. This is common early on in pregnancy and never caused any concern.

Gender predictions – We were pretty convinced from the beginning that this baby was a boy, and everyone that tried to guess based on old wives tales or how I was carrying also said Boy – the one exception was my Mom

Cravings – Nothing strange like pickles with ice cream, but ice cream itself has definitely been a craving throughout and carbs. I had been on a gluten free diet for almost two years when I got pregnant but it seemed like all my body wanted was bread and non-GF carbs so I eventually gave in. I needed that gluten for energy 🙂

Best part of the first trimester – This was definitely telling our immediate families and a couple close friends who were also pregnant. We kept the pregnancy pretty tight-lipped until this trimester was over, but on Father’s Day told our parents – I think this was the best gift we could have given then, everyone is happy and excited for us.

Worst part of the first trimester – Exhaustion…I don’t think I have ever experienced tiredness like this before. I am not one to take naps but I definitely tried to squeeze one in whenever I could during these first few months.

Showing – I could see a little “bump” that looks more like a beer gut than a baby – but no, I was not showing enough that anyone would guess I am pregnant 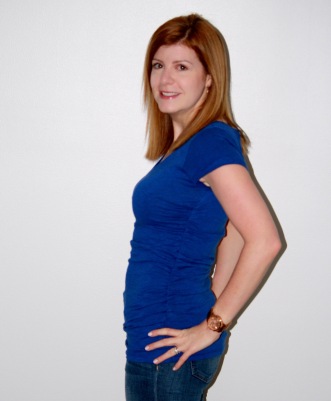 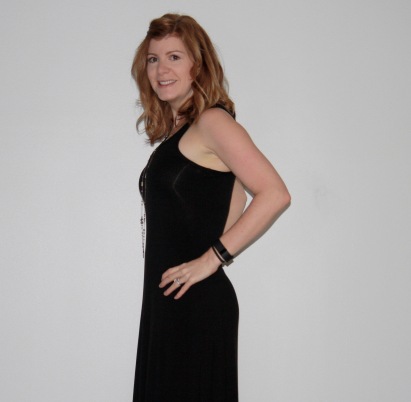 13 Weeks – End of the first trimester

What do you think about this post? Let me know! Cancel reply